Who is Noah Bond?

For one thing, he’s not really NOAH BOND. This nom de plume was selected to avoid confusion with another published author.

NOAH BOND practiced law in Fort Lauderdale for most of his life, providing an unusual perspective on the evolving American culture. His work was first published in the University of Florida Law Review, his alma mater. His undergraduate major (Ohio State) was International Trade.

NOAH BOND has been married to the same patient woman for many years. She took the photos that appear on the web sites, book covers and articles about him. Together they’ve visited archeological sites from Monte Alban in Mexico to Abu Simbel in Egypt. Every so often, they rent an apartment in Paris or London. 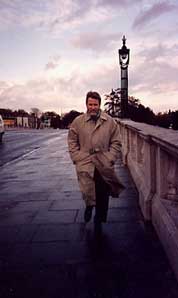 The response from you has been gratifying. I thank you for reading my books and recommending them to your friends and relatives. The primary promotional tool for these novels is word of mouth at this time. In the meantime, I remind you that books make great gifts. Even better, you can order books online and have them gift-wrapped and sent directly to your family and friends with your personal greeting to the recipient.

I’ve been asked about NOMAD/Y The Moon Base Project. Although it was classified “science fiction/fantasy” by the industry, the science fiction component is small (but significant). The novel is basically about discovering clues that lead to a massive cover-up, and then having the courage and ability to do something about it – while someone is trying to stop you. Is it accurate? There was an active project to establish a Moon Base. NASA did develop a thermo-generator in the 1960s at a NOAA facility in The Bahamas, then no more was heard about it. There is no doubt in my mind that NASA thought that the Apollo Moon landings were just steps toward a Moon Base. (Congress evidently thought otherwise.) The basic plot is rooted in facts. The research was exciting. There are technical errors, mostly intentional.

In contrast, The Doorstep of Depravity is based upon my experiences as an attorney. This novel has been described as John Grisham meets Robin Cook. Naturally, I am delighted at the comparison. Yet this is neither a court room drama nor a story of intense medical investigation. The backdrop of the story is the law office of Grace O’Higgins, who – like most attorneys – does not belong to a large firm. Her dealings with the most venerable firm in town provide a realistic contrast to the practice of law as portrayed on television. All I had to do was add a psychopathic client with remarkable abilities. I selected Syracuse, New York, as the location so that the motion picture could be made in Canada. The research involved viruses, medications and New York estate tax law. I had competent help. Ultimately, this novel is about the consequences of accepting strangers as they present themselves.

The Lost Testimony of Bones LeBeau is my first historical novel (although NOMAD/Y was firmly grounded in history). Anyone who studies the Kennedy assassination will quickly find himself completely immersed in facts, snippets of truth and conflicting theories. The information is overwhelming. It took a bull session fueled by red wine and strong coffee to sort it out one night. But at the end, the motive was crystal clear. Then came the problem of presenting it. The solution was to wrap it up in the fabric of the 1960’s and relate it through the eyes of a witness – who later responded to the FBI request for information. If writing a suspense novel is like downhill skiing (which it can be), then writing a historical novel is like the slalom event. The pace must be fast, but there are all these gates (facts and dates) you must go through. About halfway through, I abandoned the project and began writing another suspense novel. But it wouldn’t be still. The idea was too strong. When I realized I needed a summary from the KGB investigation to tie up the loose ends, I went back to work. The result is unlike my two previous novels, but perhaps more satisfying to those who wonder why JFK was shot.

All the Targets. In the midst of writing The Lost Testimony of Bones LeBeau, I received a very cordial, but firm, warning not to finish it. It was not a threat. But I was reminded by someone who was connected that certain government agencies and mob interests had actively discouraged such endeavors in the past. It was enough to make me start a new project, which turned out to be All the Targets. But about halfway through it, I decided to finish Bones LeBeau. No repercussions so far. When I returned to All the Targets, I was surprised to find that some of the fictional events I had written had become historical facts. Among them, two American automobile manufacturers had been nationalized and Palestine had declared independence unilaterally. These were major elements in the novel that were removed or changed significantly. I fully expect that further changes will occur that in the near future that will compromise minor elements of the story. This is a risk inherent in writing about current world events. Because of the time that elapsed between the start and the completion of this novel, I deemed it prudent to eliminate the year from the date at the beginning of each chapter – although the year can still be determined by matching the day of the week with the date of the month. If there was ever a story that wrote itself, this was it. Writing without an outline or destination, I was constantly surprised by the directions it took. Only after it was written did I attempt to provide cohesion through a long editing process. I’m not sure why this novel contains so much destruction and mayhem. It seemed to fit the story at the time, and still does. Predictably, Hollywood finds it to be “cinematic.”

I’ve found that when you place a few interesting characters in a situation where they have to interact, they will do so in unpredictable ways. Thomas Harris, author of The Silence of the Lambs, put it this way in his forward to Red Dragon:

I was invisible then, out there in the dark, the way I am invisible to my characters when I’m in a room with them, and they are deciding their fates with little or no help from me.

None of my novels to date ends as I had originally expected. To achieve this spontaneity from my characters, I tend to write in dialogue rather than narrate the story. I refrain from detailed physical descriptions of the characters for the same reason. I guarantee that you will not be prepared for the ending of any of my novels.

Suspense is best served with a twist.


Do I know any of these people? Surprisingly, none of the characters is based upon a single real person. My own point of view as a solo attorney is expressed by Grace O’Higgins, but we are not similar. What about the raccoon? Yes, there was a Snooks, who took up residence in our backyard.

I have always written just for the pleasure it gives me.

Some of you want to know why I write. I have always written just for the pleasure it gives me. This may be due to some gene that appears once every century, because there is little in my family history to explain it. When I get an idea that I think would make a good story, I make notes about it and give it a working name. (I have dozens of these.) Once I have started writing a story, I know that it will take unexpected turns. So, although it sounds strange, I complete the novel in order to find out how it ends.